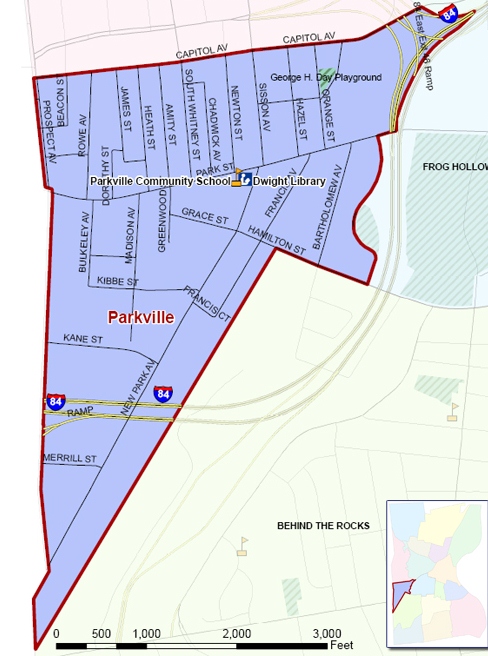 Parkville is one of the smallest neighborhoods (only 330 acres) in Hartford and is located on its western border with West Hartford. Parkville was named for its location at the intersection of the North and South branches of the Park River. When the Dutch first settled Hartford they called this river the Little River. As Hartford grew and expanded, the name was changed to the Mill River, then the Hog River, and then again to the Park River, and was a water source for the factories and mills that grew along its banks. A neighborhood formed around the factories and mills. Two and three family homes sprung up at the turn of the 20th century. These multifamily homes remain the predominant housing style in Parkville.

Some of the more famous factories to locate in Parkville include:

The Park River, after which Parkville was named, is no longer visible to passers-by. It was buried in the 1940s by the Army Corp of Engineers. Parkville became and continues to be a place where people live, work, worship and socialize. Today Parkville is being revitalized. Old factories and mills are being converted to loft apartments. Parkville is transforming itself into a home design district. Storefront businesses and wonderful restaurants line the main roads of Parkville.